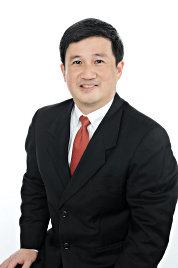 Roy Yeo was called to the Singapore Bar in July 1995.   An alumnus of Anglo-Chinese School, he obtained a Bachelor of Laws (LLB.) degree from the University of Bristol, UK in 1993.  He practised in one of Singapore’s largest law practices early in his career and then moved on to have his own practice with Sterling Law subsequently.  His current legal practice encompasses a varied mix of civil and commercial litigation.  He takes on contentious family and probate matters, and does some criminal work.  He is a Commissioner of Oaths.

On the property management front, Roy currently serves as a Town Councillor on the Tanjong Pagar Town Council and is a member of its Tenders and Contracts Committee.  Some years ago, Roy served for 8 years as the Chairman of a residential condominium Management Council (Crescendo Park).  Following that, he also served as a committee member of an industrial building Management Council (Citilink Industrial Warehouse).

In the corporate sphere, and for a decade (2005-2016), Roy was an Independent Director of Lantrovision (S) Ltd (an SGX-listed company), a leading regional provider of ICT infrastructure cabling services and related components.  He chaired its Remuneration Committee and was a member of its Audit and Nominating Committee.

Active in grassroots/community service in Singapore, Roy was Chairman of the Henderson Community Club Management Committee (CCMC) from April 2006 till May 2021.  He has served in various capacities within the Tanglin-Cairnhill (now Henderson-Dawson) division of Tanjong Pagar GRC since 2002 – as member/Citizens Consultative Committee and Assistant Secretary/Secretary at Cairnhill CCMC prior.  Roy was a licensed marriage solemnisor.

He currently serves as a member of the Tanjong Pagar-Tiong Bahru Citizens Consultative Committee and is an active volunteer in the constituency.

For his contributions, Roy was awarded the Public Service Medal (PBM) by the President of the Republic of Singapore in the 2011 National Day Awards.

Any more questions? Feel free to write us a mail!

We make client communication a priority, and encourage direct and open dialogue throughout the legal process. Our lawyers will work closely with you, keeping you informed and protecting your interest every step of the way.

The information contained in this website is for general information purposes only. The information is provided by [Sterling Law Corporation] and while we endeavour to keep the information up to date and correct, we make no representations or warranties of any kind, express or implied, about the completeness, accuracy, reliability, suitability or availability with respect to the website or the information, products, services, or related graphics contained on the website for any purpose. Any reliance you place on such information is therefore strictly at your own risk.

This is a notification that can be used for cookie consent or other important news. It also got a modal window now! Click "learn more" to see it!

We may request cookies to be set on your device. We use cookies to let us know when you visit our websites, how you interact with us, to enrich your user experience, and to customize your relationship with our website.

Click on the different category headings to find out more. You can also change some of your preferences. Note that blocking some types of cookies may impact your experience on our websites and the services we are able to offer.

These cookies are strictly necessary to provide you with services available through our website and to use some of its features.

Because these cookies are strictly necessary to deliver the website, you cannot refuse them without impacting how our site functions. You can block or delete them by changing your browser settings and force blocking all cookies on this website.

We also use different external services like Google Webfonts, Google Maps and external Video providers. Since these providers may collect personal data like your IP address we allow you to block them here. Please be aware that this might heavily reduce the functionality and appearance of our site. Changes will take effect once you reload the page.